Kentucky ghost story of a gravedigger who hides a horrible secret in the nearby haunted house.

The stately old house sat next to one of the few grassy fields left in the old tobacco town of Hazel Mead, Kentucky. The place was built with a lottery of Indian corn bricks–brown, black, yellow, red–mostly red. Husk strings of leafless ivy ribbed the mortar and crawled over the dark, empty glass panes of the only window visible from the park. Surrounding the lonely house, hiding the house, burying the house, stood a tall wooden fence and a long row of trees, their gray pillars of bark like raked steel. The limbs were still full and green but a cloudy, late September green. Leaves flitted and fluttered. Branches bobbed lazily in the breeze.

Clyde Redding zipped up his crunchy nylon jacket. It was cool once he stopped moving, once he finished filling in the murdered man’s grave.

Clyde was in charge of the grounds. He told himself it was his park, since he tended the gardens, and he did with it as he pleased. And day after day, working through twilight and into the still night, he planted the land in bodies and sifted seeds into the topsoil. In time the grass would grow over and he would add flowers, sunny and bright, to please the daytime visitors. No one would know his midnight toils.

He laid his spade back in the rusty wheelbarrow with the rake and the hedge trimmers and the two large, black garbage bags. He eased himself into a rooty chair at the base of an elm and breathed heat into his blistered, dirty hands. The chill always started in his fingers. Or was it his spine? He shuddered at the sight of the red brick house looking down on him, forever watching with its endlessly dark, shot-silk window eye. It nibbled at his nerves and took fanged bites out of his conscience.

Nothing worried him, frightened him, teased him more than the house. When the sun was flying high over the park and the afternoon breeze bending the long green grass families would pass through, some with young children who lingered here and there, unaware of the death that lurked everywhere, some with dogs, sniffing and digging and testing his patience. But none of those people had ever seen him filling in holes.

He would agonize through that harsh daytime, watering his flowers, cutting his grass, pulling his weeds, and cautiously waiting to watch the last of the visitors clear out before picking up his veteran shovel. After dark he would do what he came to do. No one would be caught dead in the park at night. They were all safe at home, full with supper and prime-time television, and falling quietly asleep in their beds. Asleep, he thought, just like all the skeletons he’d laid to rest beneath the ground, beneath his feet. Tens, hundreds of them, perhaps.

Still Clyde double checked the latch at the gate. Locked. The only way into the park at night was to jump the bony wrought-iron fence or to enter through the cutaway slab of door in the length of wooden fence that entrenched the red brick house. But no one ever passed through that door. It was padlocked. And Clyde, who had eyed the house feverishly for years, knew of no one that lived inside.

Returning to his wheelbarrow, he couldn’t help gazing up at the buried prison tower of bricks with its backdrop of windswept gray clouds and smoky moonlight. In that high, solitary window he caught flashes of ghosts like reflections of his own wicked deeds. All those buried by his own wicked hand.

A tear ran over his cheek. He swiped it away furiously at the thought of the house, the ghosts, glaring down at him and pushing forth their judgments. The weight of his nightly tasks bore down on him like the globe in Atlas’s arms. His heart felt paper-thin and halfway see-through. He had to do something–something to erase his evils. He would dig another hole.

He chose the spot carefully. Each one of his precious, secret skeletons he had marked. Mr. Eldritch.

He stabbed the earth. He drove the spade, crunching into the ground, with his booted heel. He tore at the fleshy dirt, lifted heap upon heap of dark clay from the icy hole and–and breathed deep the air of solace when he met Mr. Eldritch, half sunken to Hell.

He heaved and hoisted the body over his shoulders. No time to fetch the wheelbarrow. Next was Mrs. Crane. Then Senator Lister. Then who? The Tanner twins? The night was a burning wick, and before long his darkness would extinguish with the hated break of dawn.

Carting the body, Clyde raced in uneven steps to the tall, wooden fence. He felt his pocket. He felt the clinking of keys. He turned a small key in the padlock, and the door swung open. The house bore down on him full-chested and severe.

The house only stared with the black silence of a deep, deep sea.

“Here! Here is what you want. I buried him, yes! I hid him beneath the dirt. But I dug him up! His burden is no longer on me. I have righted my wrong. Judge me no more!”

The house creaked and moaned as Clyde burst into the foyer. He vaulted up the carpeted stairwell, flipped the stiff four-by-four of Mr. Eldritch off his shoulder and onto the second-story parlor sofa. He dusted his hands and, in a smile, bared his teeth to the shafts of moonlight sliding through the empty eye-socket window.

He and poor Eldritch were not alone in the room. There on the end of the sofa, the reading chair, the roll-top desk, the window box, the hardwood floor, the foreign rug, the stony hearth, he met a whole crowd of people. And it wasn’t the first time he’d met them. He could remember clearly now the old school teacher, Ms. Bracht; and the sheriff’s father, Mr. Moore; and Widow Wheatley’s husband John Wheatley. And then all the others, so many of them. He remembered the stone markers he’d left at their resting spots, remembered burying them in the night, digging them up in darker night, wiping the sweat from his brow, hauling them to the house, gasping for breath, pounding up the stairs, throwing them down in front of the window, and finally filling their empty graves with clumps of dirt and beds of rich black soil–all to appease the ever-watching house.

He would fill the room even fuller tonight. There was still space. Still a little time. After that, tomorrow night and the next and the next.

Like an early winter draft, he rode the halls and the stairwell, clapped open front door, flew outside toward the grounds, passed the mailbox… There! On the mailbox. Something caught his eye:

His name on the side.

He glanced up at the house, his tears drying in the pelting breeze and his vision clearing as he spotted the curling wrought-iron letters arched above the fence, facing out for visitors.

He read the words backwards for the hundredth time and, as always, in utter horror and disbelief:

Sobbing, Clyde gritted his teeth, shouldered his shovel, and lurched out to the next grave. 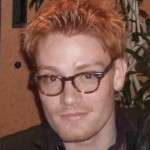 After moving from Kentucky bluegrass to the deserts of Arizona, Nathan Oser has found a home with his wife and kids on the Japanese oceanside where he spends his days teaching English as a second language, exploring the cuisine, restringing his shredded guitars, sketching the scenery, and scribbling out stories.

The Path of Dead Roses

A Figure Of Fun