Creature story of a Louisiana gambler who runs afoul of swamp vampires while on the run from the law.

Hungry for the Gulf, the Dark River flows broad and wide after River Bend. The marshlands appear as the riverbanks fade. But if you go far enough into the marshes…

Now Chancy Fox was a gambling man, and a good one. So it was just damn laziness that ran him afoul of Sheriff Black Mountain Kincaid and his two brothers, Kennesaw and Stone. That was up at Swann’s Landing, right above Meridia. Chancy may have been lazy, but he wasn’t a total fool. He was up and out of there before that fifth ace he’d tucked up his sleeve hit the table. He figured as soon as he was outside of Swann’s Landing, he’d be out of the Sheriff’s jurisdiction and free.

Chancy Fox had offended something deep in Black Mountain Kincaid’s rusty soul. The Sheriff reached the limits of Swann’s Landing and just kept going. And where Black Mountain went, his brothers were sure to follow.

That gambler ran south, hugging the banks of the Dark River. Past Carpenter and Egret. Past Meridia itself. And everywhere he tried to get a friendly game of cards going, here they would come, riding into town on their black horses, close as memory, relentless as death. Sheriff Black Mountain Kincaid and his brothers.

Chancy Fox was getting right desperate. So he came up with a plan. He took a ride on the Blue Stag Packet steamship when it stopped for wood at Paradox. He knew the Brothers Kincaid would be right behind him. Soon as the steamer hit the marshlands, he undid the dingy tied to its side and slipped away into the night. Into the marsh he went. Twist right, twist left, twist right again. Soon as he was well in, he rowed into the grass and waited. Sure enough, another dingy came slipping past with three large men and a lantern. Chancy Fox waited for a few minutes, chuckled and stared rowing back the way he’d come.

Now you’d think a man couldn’t lose something as big as a river, but Chancy managed it. He turned and turned and turned again and still couldn’t see anything but marsh grass. He was so busy not seeing things that he didn’t notice all the Cyprus trees until he was surrounded by them. Spanish moss like old men’s whiskers brushed his face and he couldn’t see for the mosquitoes. Then two things happened. He saw the huge rotting old plantation house rise up out of the darkness.

And someone coshed him a good one on the back of the head.

When Chancy came to, he was lying on a dank, mildewed old chaise in the middle of a dank mildewed old room. And three women were fussing over him. Well, at least they looked like women. Kinda. They were are tall and thin, like paper fold herons, and dressed in ragged finery at least sixty years out of date. And their eyes were very, very bright – and their teeth were very, very sharp.

At first, Chancy was enjoying all the attention. Then he actually started listening to what the sisters were saying and the enjoying stopped right fast. Their voices were dry and rustley, like mice scampering through old newspapers. They’d been in that decaying house ever since Daddy died and the swamp rose, and they were right lonely…

…And right hungry. And Chancy he remembered that mosquitoes ain’t the only things that drink blood.

But Chancy could think fast when he had to, and he thought fast now. “Ladies,” he said with a courtly cough, “I am flattered by your attention, but there are three of you, and I’m right poorly. But out in that swamp is a boat with a lantern, and three of the finest men it is my privilege to know. And while I am loathed to share, whatever are friends for?”

The sisters looked at each other and tittered and suddenly they were gone, like herons flying off into the night. Having effectively taken care of Black Mountain Kincaid and his brothers, Chancy Fox tipped his hat over his eyes and went to sleep. Later, he thought he heard screams coming up outa that swamp, but it was probably a dream.

As day started to break, there was a dry rustling like birds with paper wings, and the sisters were back. Now instead of being tall and thin like herons, they were round and blotted like ticks and not paying any attention to Chancy. But Chancy was paying attention to them. They disappeared into the bowels of the house and Chancy waited until the sun was up full, broke three legs off a chair, and went hunting.

He found them in three separate rooms, lying in three separate coffins, and without so much as a thank you, he drove a chair leg through each of their hearts. Black blood erupted all over the place, but Chancy didn’t mind. And when they were dead, they were really dead.

Now if Chancy had been as smart as he thought he was, he would have found his dingy and gotten far, far away from there. But he figured ladies like that would have jewels or some such, and it took him a while to find them. But find them he did, even though it took him all day. Night was falling when he finally headed down the crumbling steps and the deep cavernous voice rumbled at him out of the night.

And Chancy Fox turned and stared at the tall bulky figure of Sheriff Black Mountain Kincaid looming in the dark, his two giant brothers on either side of him.

“That’s strange, gambler. Heard the same thing about you.”

And the Sheriff smiled and his brothers smiled. And their eyes were very, very bright, and their teeth were very, very sharp. And Chancy Fox remembered a few other things about bloodsuckers.

He didn’t even bother to scream as they closed in on him, their blood-soaked clothes rustling like paper wings.

Hungry for the Gulf, the Dark River flows broad and wide after River Bend. The marshlands appear as the riverbanks fade. But if you go far enough into the marshes… 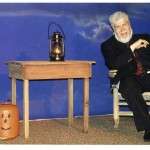 Thomas E. Fuller (1948-2002) was a native of Alabama, but spent most of his working life in Duluth, Georgia. He was a co-founder, head writer and artistic director for the influential Atlanta Radio Theatre Company, as well as an award-winning author of numerous stage musicals and plays, audio dramas and novels, including the popular "Pirate Hunter" adventure book series.