Have you ever heard someone use the expression, “My life flashed before my eyes”? People use it so much it’s become a cliche’. But such a thing really happened to me. Although it wasn’t my life that I saw.

When I was a young man growing up in Chattanooga, Tennessee, I was dating a girl named Melissa. She lived just over the state line in the small town of Lafayette, Georgia. When this incident happened, I’d only been seeing her for a couple of months, so I was still trying to impress her as best I could. So you can imagine my anxiety one Friday night – the night of a big date I’d been planning for days – when my car broke down right after I’d gotten off work. I kicked the tires so hard I almost broke my foot!

Well, I frantically located my big brother and coaxed him into letting me borrow his old beat up truck. Sure, it wasn’t the fancy chariot Melissa was expecting me to show up in. But all I cared about was finding four wheels that could take me straight to Lafayette – via Chickamauga Battlefield.

Now if you’ve never heard of Chickamauga – think of it as the Gettysburg of Georgia, but bigger. Chickamauga is actually an Indian word meaning “River of Death.” And it lived up to its name during the Civil War when a bloody battle was fought there. The Yankees were trying to capture Chattanooga, which was a major rail center at the time. The Rebels drove them back, but not before nearly 40,000 soldiers died.

Of course, the history behind the battlefield wasn’t important to me that night. What was important was getting to Melissa’s house, and I was already over an hour late. So I knew the quickest way to get there was the two-lane road that cut straight through the heart of the battlefield.

As I gunned my brother’s truck over the state line, a hard rain that had been falling all day was tapering off. But it left behind a thick and eerie mist that crept through the open battlefield like ghostly fingers. The park had closed for the night, and there were no cars in sight. The road was almost impossible to see. But I had used this park as a short cut a million times before, and knew it like the back of my hand.

As I was driving down the main road, I noticed the faint headlights of a car approaching in the distance. For a split second, I wondered if this was someone just like me, late for an important date with a Georgia beauty. I could only hope he saw me in the swirling mist between us.

But as the car drew closer, I noticed it was unlike any vehicle I had seen before. The headlights appeared to be a strange greenish color. I knew a thing or two about cars, but I’d never seen headlights like that. Maybe they helped the driver see in bad weather conditions, I thought.

The car drew closer and closer, and those green lights were burning at a wattage I’d never seen from any headlight. And they seemed to bounce up and down, and weave from side to side, as if the car was riding on springs. I politely tapped my horn, hoping the driver could see me in front of him.

But as the mystery car got closer and closer, the driver appeared to swerve further into my lane. This time I laid on the horn – what’s wrong with this guy, I thought, is he drunk? Then I saw something that really shook me. There were no beams shooting out of those green lights – they looked like two floating orbs, powered by some other source. They even looked like…eyes.

I frantically blared my horn again as the green lights drew near. And just before we passed each other, the driver suddenly swerved into my lane! I reacted quickly, spinning the wheel the opposite way. My truck flew off the road and onto the battlefield grounds, swallowed by darkness. I slammed into a tree, and the world turned black.

When I came to a few moments later, the battlefield was silent, save the hissing sound coming from the crushed hood of the truck. My headlights were smashed, and the only light was from the bright stars above. I felt the large bump on my head and groaned.

It was then I saw the green lights again, sitting silently in the darkness, observing me. I watched as the lights floated closer and closer toward my vehicle. In the silence, I could hear no car engine sputtering toward me. It couldn’t be a car that I had seen. But what was it?

Suddenly the lights disappeared. I began to tremble with fear for the first time. “Who’s out there?” I called out, but no one answered. Then I heard a rustling sound against my car, peered out the window, and in the darkness could just make out a large shadowy figure circling me. I thought it was a large man, for it shuffled about on two legs. But as my eyes adjusted, I could see that it’s hair was long, right down to the waist. And it made a horrible moaning sound, the saddest sound I’d ever heard.

Just like that, the figure disappeared, and the night was quiet again. “Is anyone out there?” I yelled, but there was still no answer. After a long pause, I slowly reached for the door handle with shaking fingers.

Then something pounced onto the hood of my truck. I looked out the cracked windshield, and what I saw was no man. It was a beast, with long dirty hair and huge, mangled jaws from which two long, sharp fangs jutted out. And it had two burning green eyes, fueled by some otherworldy evil I couldn’t begin to comprehend.

I tried to scream but found myself mute, hypnotized by those green eyes. And as the creature and I stared at each other in silence, the battlefield began to transform around us. The darkness gave way to a strange green glow. There was no road, no cars and no monuments. Instead, I was surrounded by smoke, fire, scorched grass and the charred remains of warfare. The sickening stench of burning flesh filled my nostrils. At my feet were piles of bodies in blue and grey unforms, drenched equally in blood. Some were missing arms, others legs. There were heads without bodies, their eyes shut tightly as if afraid of their ultimate fate. And everywhere were the low and agonizing moans of pain and death, filling the skies along with the black smoke in a hellish symphony.

Suddenly, a curtain of darkness fell down on the battlefield. I could hear a car horn behind me. The creature leapt off my hood and disappeared into the night. It was then I realized I was back in the wrecked truck. A couple of rangers ran down the hillside to my aid. “Are you alright?” they asked.

“Did you see that animal that attacked me?” I asked them breathlessly. “The one with the green eyes?”

The two rangers looked at me strangely. “That’s a serious bump you got on your head, son,” they answered. “You must be seein’ things.”

“But something jumped on my truck,” I yelped. “I saw it!”

But the rangers never found evidence of any creature. Even when daylight broke, and my truck was towed away, not a single animal print could be found. And I soon gave up my argument about the creature, fearing that people would think I was crazy.

Believe it or not, in later years I ended up becoming a park ranger myself at Chickamauga Battlefield. The area was no longer just a shortcut between Chattanooga and Lafayette. To me it was hollowed ground, from which I could point out every military maneuver, every act of bravery, and every tragic defeat.

But as time passed, other folks insisted that they, too, had spotted the mysterious “Green Eyes” while driving through the park at night. And they would ask me what I saw that fateful night as a teenage boy. You know what I told them? I would say that what I encountered that night was no monster, but the shadow of death that creeps around every town, alleyway and battlefield where men go to war – and will keep doing so as a reminder of our tragic mistakes. 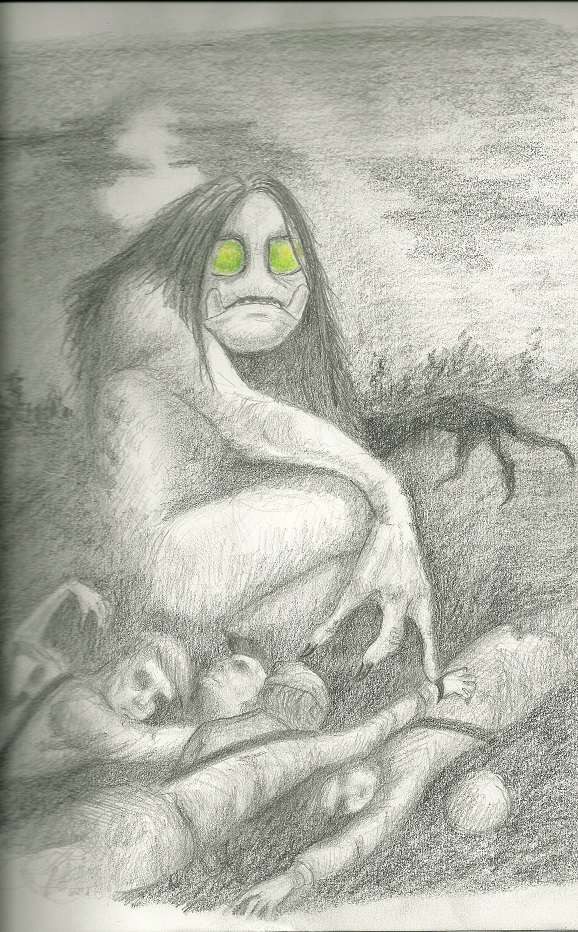 Where Did “Old Green Eyes” Come From?

If Georgia has its own Civil War Bigfoot, it may very well be “Old Green Eyes” of Chickamauga, a legendary creature that, according to numerous ghost hunters and tourists through the years, still haunts the massive national park at Chickamauga Battlefield. Green Eyes isn’t the only apparition roaming the grounds of Chickamauga, but he certainly is the most famous.

Civil War battlefields are some of the most haunted places on earth. With so much death, destruction and sorrow in one area, it’s no surprise that restless spirits still wander the land. Chickamauga Battlefield, in northwestern Georgia close to the Tennessee state line, was the scene of one of the bloodiest battles of the war, second only to Gettysburg according to historians.

The Civil War was approaching its end in 1863 when Union troops captured Chattanooga, Tennessee with their eyes set on Atlanta to the South. General Willaim Rosencrans was the Union commander who led the charge into Georgia in September of that year. But he met violent opposition along Chickamauga Creek from Confederate troops led by General Braxton Bragg and General James Longstreet. The two day battle ended with the Confederate army pushing the Union army back to Tennessee. 37,000 soldiers on both sides were killed.

The Battle of Chickamauga was a much needed morale boost for the Confederate army. But of course, their victory would be short lived as Union General William T. Sherman eventually took the reins of the Union army and drove south to Atlanta, ending the war.

Years later, numerous people encountered strange goings-on at the old battlefield grounds. Some would hear the sounds of gunshots at night, or of soldiers marching, moaning and crying. This would not be a surprise, as the battlefield is believed to be filled with makeshift graves containing Union soliders. After the battle, many Union corpses were left lying in the field for weeks, only to be buried in unmarked graves.

One famous ghost who is said to wander the battlefield is the “lady in white” who is searching for her husband. But Green Eyes is the best known apparition, and has appeared in two different forms. Some believe Green Eyes is a soldier whose head was blown off during the battle, and now wanders Chickamauga looking for his body.

The second version of the story – and the one we used here – is that Green Eyes is a strange, otherworldly creature, half-man and half-beast. Old Green Eyes wanders Chickamauga Battlefield on two legs and has long, stringy hair down to his waist. But he also has glowing green eyes and huge jaws with two sharp fangs sticking out. It is believed that this version of Green Eyes comes from a Native American legend from long before the Civil War. There were some reports of Green Eyes wandering among the dead at Snodgrass Hill shortly after the Battle of Chickamauga.

Written and Directed by Craig Dominey