Creature story of a mysterious Tennessee lake that tends to attract visitors – for life!

One wonders how these places get their names. There was nothing especially owlish about its 60 acres of surface or the little islands that poked their domed heads above it. It was a pretty lake in the Tennessee woods, peaceful and pristine. Exactly the kind of place Monty needed for a few days of splendid isolation. Fishing, reading, getting back in touch with his inner man. A few precious days to decompress before the firm reeled him back in and sucked him dry.

There were a couple of reasons Owl Head Lake appealed to him. One was its inaccessibility. Three miles of dirt road to a primitive campground ruled out all but the most determined campers. The second was its unpopularity. The lake had acquired a bad reputation ever since people began disappearing from its shores—a group of teenagers vanished a few years ago, their tents and gear untouched. Before that a family went missing without a trace. And those were just the two that he knew of; he supposed there were more. On both occasions the lake was dragged, divers sent into its murky depths, to no avail. The divers reported the lake was uncommonly deep and cold but harbored nothing out of the ordinary. So the stories grew that the lake was cursed and as the stories multiplied, the locals kept away and its campsites gradually fell into disrepair.

If tall tales and ghost stories kept campers away, that suited Monty just fine. The last thing he wanted was company, some garrulous stranger making chitchat about the weather or some tedious retired couple from Des Moines. No Owl Head Lake was just the tonic he needed. Who knew what happened to those teen-age campers. Kids are famous for making stupid decisions. He could imagine them yelling, “Watch this” just before plunging over a cliff.

As for the lake’s reputation for being haunted or stalked by a serial killer, well he was a city boy and violent death was all around him. He knew the odds of being killed by a stranger were greater than getting struck by lightening. And besides as a lawyer he made his living defending the most depraved sociopaths on the planet. No, he wasn’t afraid of a violent end, he was afraid of some friendly camper destroying his solitude.

His heart sank when he first drove in and saw the bright blue of a tent pitched near his favorite site. He needn’t have worried the neighbors were packing up and leaving. The man came over to Monty his face showing obvious signs of distress.

“I wouldn’t be staying here, fella, if I was you.”

“There’s something wrong with that lake. Something evil. You hear them stories about people disappearing and all?”

“Maybe, but I ain’t staying to find out, we all heard weird noises last night and now my dog’s gone missing. I’d appreciate it if you’d keep an eye open for him. If he shows up would you give me a call?”

The old man handed Monty a slip of paper with a phone number on it. Monty promised he’d do that. He watched the man pack his gear calling “Rufus” every few minutes until he finally drove away leaving nothing but blissful silence behind. When the neighbor was gone, Monty tossed the phone number in the fire, mixed himself a cocktail and sat facing the lake.

The sun was low in the sky, the birds were active, ducks, geese and herons making their living from nature’s intricate web. The graceful herons, like statues working the margins while flotillas of ducks and Canada Geese patrolled the deep water like opposing fleets. On the small islands, a glint of white, an owl or bald eagle. Fabulous, this is the stuff his spirit thrived on.

In spite of the scenery, his mind drifted back to his high-pressure job. He had to admit it was a hell of a way to make a living. Sure everyone is entitled to the best defense they can afford blah, blah, but his rich clients knew they could buy their way out of almost anything. Did it make him feel dirty? No, not really. He was a hired gun. Someone had to safeguard the civil rights of wealthy child molesters, drug dealers, thieves and murderers. How should it make him feel? He didn’t make the rules. Still, thank goodness for places like this, islands of peace and quiet to soothe a troubled mind. Nature restored his soul. He raised his glass to the setting sun by way of thanks.

Weren’t there three islands in the middle of the lake? Oh yes. From this angle it looked like two but there were the three little mounds. He knew them well; he called them the 3 knobs. They looked like the tops of three heads, dome shaped and symmetrical. They reminded him of three bathers wearing forested bathing caps. Something spooked the Canada Geese just then. They broke the placid surface of the lake in a spontaneous dash into the air sounding their alarms. He admired the natural world. Now there was a system of justice that made sense. Eat or be eaten, the strongest survive, that was how it should be. There was no plea-bargaining out there, no sir-ee-bob.

When his attention returned to the islands, they were spread out in a line before him. The sun was a golden ball spreading jewels on the rippled surface. The fleeing geese reminded him of the case he just finished litigating. Chichi Maldonado. What a piece of work. If ever anyone deserved to be locked away, it was Chichi. Bargaining down multiple felonies to a few months in a country club prison due to a technicality. That’s why he made the big bucks. He even got a bonus for that bit of work. What a system.

Was he mistaken or was the configuration of the islands slightly different? One of the knobs seemed to have drifted closer. It must be a trick of the light. The sun was almost down. What a scene. A sky striped like cotton candy and grape soda. The reflection on the lake was flawless. What a picture. He pulled out his camera and snapped a few for posterity. The heron called and took wing. Calling it a day he guessed.

The ducks too took wing. Where do ducks sleep he wondered. He loved the sunsets on this lake. He was here six months before. He looked back in the little camera’s memory and pulled up some shots he’d taken in May. Yes, that was another soul satisfying sunset. What was different about that earlier shot? The knobs. In the earlier picture they were somewhere else entirely. That’s strange he thought. It was his last rational thought before the island dragged him kicking and screaming into its toothy maw. 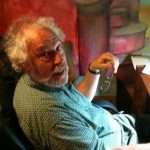