My worldly path led me to the historical American city of Washington D.C. Just before the journey I happened upon information of a cemetery there that holds the final resting place of Rosalie Mackenzie Poe. Rosalie is sister to American author Edgar Allan Poe. I have long held great admiration for Mr. Poe’s works so I decided to pay respects to his sister and visited her gravesite.

Strange events began to happen before I was even near the cemetery. First, the restaurant I had chosen to dine in had a very large painting of a raven directly in front of the ladies room. It was staring right at me when I opened the door to exit. It was larger than life! I couldn’t resist a snapshot. Then, accessing the cemetery was an adventure all its own. It happens to be an entire city block in size. A Washington D.C. city block is nothing to throw sticks at. It has four gates, one on each side. Three are open and one is kept closed. Can you guess which gate I arrived. The closed gate!

The cemetery receptionist on my mobile phone led me to the closest open entrance. I dropped the call when I could see the open gate. Just as I walked through the cemetery entrance there was a big black bird all alone in the tree to my right. He was calling out. I stopped to acknowledge his efforts. Then I smiled and made my way to the office where I was given a map directing me to Rosalie.

The receptionist pointed out that the grave site was only a few headstones in from the back of section D. I followed her direction and found a very small head stone with only the name “Rosalie” engraved on it. Oddly enough a tall heavy marble monument had fallen onto the headstone’s corner and no one had remedied the situation. As I attempted to clear the area of small weeds around the stone, the next odd circumstance came to pass. A large tree just next to me suddenly filled with various types of birds. The birds were raising a ruckus and causing leaves, small branches and what appeared to be acorns to fall down on me. I moved away from the tree and observed their behavior. While waiting for mayhem to subside I strolled down the row of headstones. Approximately ten plots down I discovered the “real” Rosalie Mackenzie Poe with name, birth year and year of departure on the stone!

Suddenly the birds left the tree and all was still again. When I returned home I called a friend to share this story. As we were conversing on the phone someone on Facebook, totally unrelated to this situation, posted an image of Edgar Allan Poe.

My friend was shocked and mesmerized by the event and remains so to this day. Coincidence or strange phenomena? Whatever they may be, these events inspired me to write the following verse:

The Ravens of Rosalie
By Cynthia Morrison

Through the gates I walk into peaceful rest,
Does he perch or does he nest,
As dark as the Raven on the wall,
Was it really only me who he call

No no no that’s not her grave,
They shout ever so frantically and so brave,
Walk the floor and that I did,
Look no more, there Rosalie hid.

Traces of Fall beginning to sprout,
The Tree with feathers I did never doubt,
They gathered there high above,
That of Raven and not of Dove. 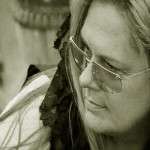 Cynthia Morrison is a graduate of the Burt Reynolds Institute for Film and Theatre in Jupiter Florida. She is an Performance artist, stage combat director and writer. Her works tend to lean towards historic content. Although she also specializes in works that speak against the suppression of women.