Henry knew he was losing his memory. His daughter said that his brain was full and needed to make room. She said it lovingly at first, but as the years passed there was frustration in her voice. He forgot her name, even though he was the one that had chosen it.

There is magic in the memory of firsts, so he worked hard to remember his first bicycle, his first kiss, even his first humiliation. All were erased. He sat with a folded newspaper, the words swimming without meaning. Some days, Henry’s daughter showed him photographs, trying to remind him of things like her little red-headed boy named after him. But he knew he was forgetting something even more important…something crucial.

He wandered through the house at night looking for it, in each creaking cabinet and under the bed despite the cracking anger in his back. It was an ordinary day when he found it hidden in the very back of the closest, past his wife’s favorite dress that he kept and the old suit he wouldn’t wear again until his funeral.

It wasn’t much larger than a shoebox. The varnish had mostly rubbed off with age and it left behind a honeyed wood, stained with the oil of fingerprints. He blew across the top layer of dust and reached for the brass clasps holding it shut. Something alive was in it, humming with a vibrating energy.

His hands shook as he lifted the lid. In an instant, his head jerked back and his ears filled with a thunderous roar. Every memory of his life came flooding forward, filled with scent and sound. He saw himself in uniform wandering a back-alley shop in a distant land. Henry could even smell the ginger and wet leaves in the air as he haggled with the store owner, finally purchasing the box as a safeguard for the day when time became his enemy.

He was back for his daughter’s birth, for the day he lost a sock at school after gym, for the first time he met his wife and didn’t much care for her. In the next instant, he could smell her rosewater and feel the quickening of his pulse. Then Henry saw her in their kitchen, his wife’s apron wrapped tightly around her waist, her once scarlet hair spotted through with gray. He could smell her sourdough cinnamon rolls and feel how her skin felt like velvet even as it wrinkled with age. Then he was back in the room being diagnosed by doctors, watching his daughter cry. Next at his wife’s funeral. Finally, Henry got to ride that first bicycle again; the wind in his face stinging his eyes.

His daughter found him that way, clutching the empty box. The coroner couldn’t figure out what stopped Henry’s brain in its tracks, killing him instantly. She took the box from him, opened the lid, and her memories walked forward like a row of paper dolls strung together, safely tucking themselves away. 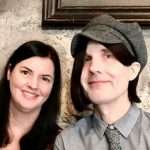 Multimedia artist, Geoff Mitchell, grew up in the Deep South’s Gulf Coast with a long history of storytelling. On hot summer days, it was common to share local legends, tall tales and ghost stories. Immersed in the tradition, he recalls listening to his grandmother add her own colorful accounts to a story while talking on the telephone. All this narrative fueled his imagination and provided an array of subjects for visual art. His work today, including miniatures, paintings, music, short films, and storybooks, consistently embodies a curious feeling of nostalgia. There is a desire to pull the past forward into the now and even propel it out into the future. Never in a sense of resisting change, but rather to remind us of where we have been, so we have a better look at where we might go. What he loves the most about making art is that it is a way of carrying on the tradition of storytelling and bringing imaginative tales to life.  He and his wife, Amy, recently founded the Museum of Make Believe as a place to keep this tradition alive. Amy has been a lifelong storyteller, creating new worlds and a cast of characters by putting pen to paper as soon as she learned to write, masterfully weaving ghost stories and fairy tales to accompany paintings, miniature scenes, sculptures and exhibits.  This led to founding the Museum of Make Believe: a fantastical world of miniature dioramas, puppetry, dreamlike paintings, thematic light and sound, all depicting original tales of the mystical and mythic. The stories are timeless and somehow familiar, as if conjured from a shared memory; or an imaginary world that has to be believed to be seen.  Learn more at: www.museumofmakebelieve.org .

Pride at a Gas Station